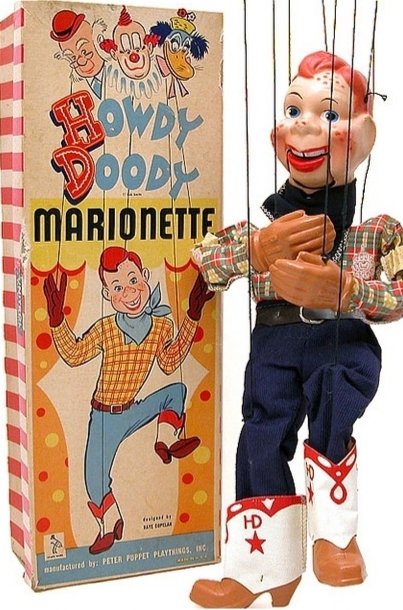 The Howdy Doody Show was one of the most popular children shows of the 1950's.

The idea for Howdy Doody began in 1947 on the NBC New York radio affiliate WEAF with a program called The Triple B Ranch. The three Bs stood for Big Brother Bob Smith, who developed the country bumpkin voice of a ranch hand and greeted the radio audience with, "Oh, ho, ho, howdy doody!"

Smith then launched Puppet Playhouse on 17 December 1947. Within a week the name of the program was changed to The Howdy Doody Show.

Children loved the Doodyville inhabitants so much this lead to the creation of the Howdy Doody marionette.

the marionette is done in Howdy's likeness, with cowboy boots, red hair, freckles, and neckerchief.