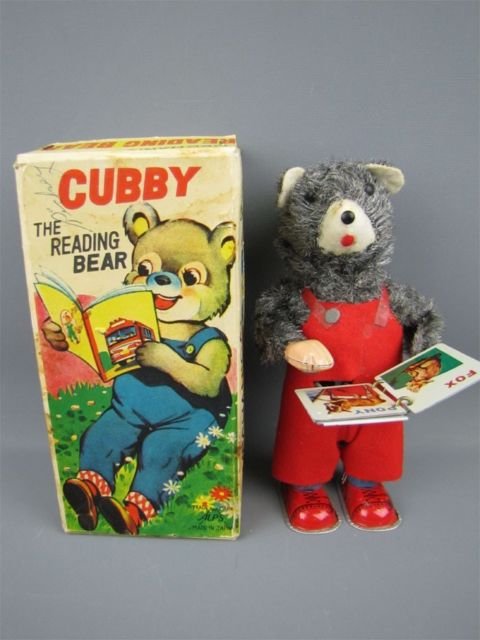 ALPS Shoji Ltd, was founded in occupied Tokyo, Japan in 1948 by a former employee of CK - Kuramochi Shoten, then the largest pre-war Japanese toy company.

ALPS produced a range of tinplate / mechanical toy vehicles, space toys including robots along with numerous animated novelty animals. Many of their early toys had multiple action features which was to set Japanese toys apart from their European / American counterparts and it was this ingenuity which ensured the popularity and demand for Japanese toys in the early post war years.

Many of which were either clockwork initially or later battery in operation.

Despite their obvious success in the toy market ALPS decided to abandon all this in the early 1970s and to concentrate all their manufacturing efforts and expertise into larger and more profitable consumer and industrial electronics marketplace.

The ALPS Toy Chubby Reading Bear is a clockwork figure, with raising head and hands that turns over pages of tinplate book.

They are truly magnificent works of art.