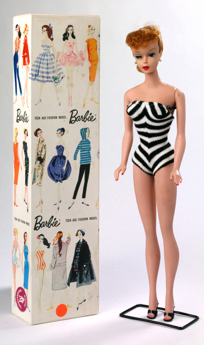 Barbie made her debut at the American Toy Fair in New York city in 1959. Eleven inches tall with a waterfall of blond hair, Barbie was the first mass-produced toy doll in the United States with adut features.

Ruth Handler co founder and the woman behind Barbie, got the idea of barbie after watching her daughter playing with her paper dolls and giving them adult rolls. Handler soon realized there was a wide open market for a toy that allowed little grils to imagine the future.

Mattel bought the rights of Lilli, and Handler named the doll after her daughter Barbara. Handler then had Mattels fashion designer create a look for Barbie that favored a teenage fashion model. Barbie came with a Zebra striped bathing suit, sunglasses and high heals.