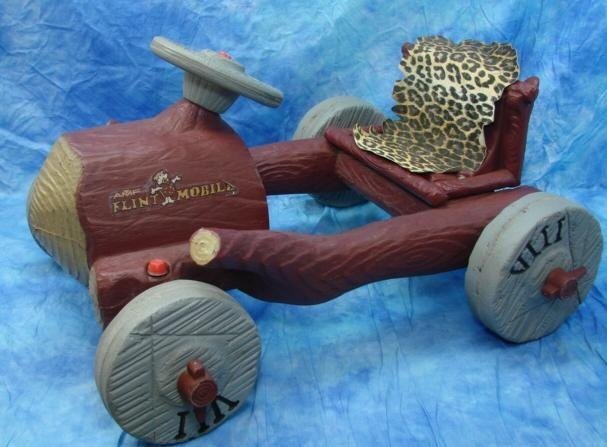 The Flintstones cartoon first hit TV screens on September 30, 1960. In 1961, it became the first animated series to be nominated for an Emmy Award. The show is considered a television classic, and is the second most popular animated TV series ever, and reruned continuously for five decades after its last season.

The cartoon Flintstones car took the world of juvenile automobile enthusiasts by storm.

The car was patented by Franklin Charles Von Karsen of Toledo, Ohio on August 15, 1961, and began production immediately selling in department stores by 1962.

The heavy duty plastic car features, stone like plastic wheels, a leppard print seat cover, and a wooden like plastic body which is 44" long.

There car was not equiped with pedals, and is powered just like in the cartoon.

With some quick foot action and a "Yabba Dabba Doo", you are on your way to the local drive in for some Brontosaurus burgers!