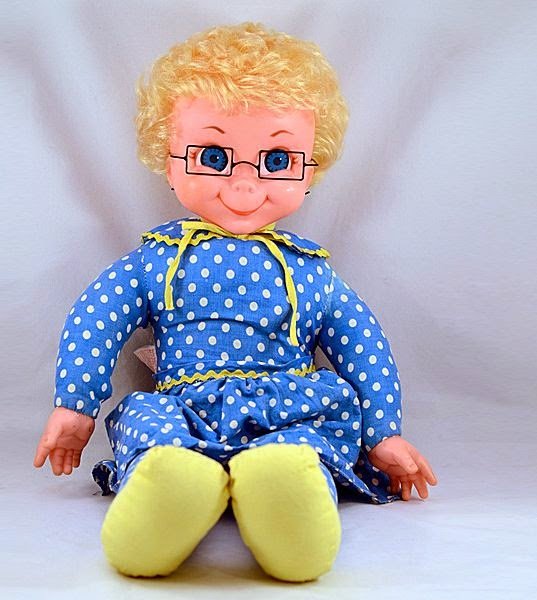 Mrs. Beasley, was the favorite doll of "Buffy" played by child actress Anissa Jones on the TV sitcom Family by Affair. The show aired from September 12, 1966 to March 4, 1971. The series explored the trials of a well-to-do engineer and bachlor "Bill Davis" played by Brian Keith as he attempted to raise his brother's orphaned children in his luxury New York City appartment.

With the help of his English gentleman's gentleman butler, "Mr. French" played by Sebastian Cabot, also had to make adjustments as he became saddled with the responsibility of caring for 15 year old "Cissy" played by kathy Garver and Buffy's five year old twin "Jody" played by Johnny Whitaker.

The story goes that Buffy insists the doll talks to her and she is quite adamant about Mrs. Beasley.

Mrs. Beasley became one of the show's central characters, with entire episodes revolving around her adventures.

She stands 20" tall, her head and hands are molded  plastic, while the rest of her body is stuffed cloth.

A wonderful addition to our 60's collection!