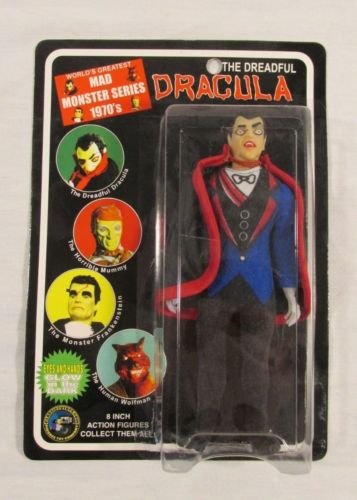 The Mego Corporation was a toy company founded in 1954. Originally known as a purveyor of dime store toys, in 1971 the company shifted direction and became famous for producing licensed action figures (including the long-running "World's Greatest Super Heroes" line), celebrity dolls, and the Micronauts toy line. For a time in the 1970s, their line of 8-inch-scale action figures with interchangeable bodies became the industry standard.

In 1982 Mego filed for bankruptcy, and by 1983, the Mego Corporation ceased to exist; today, Mego action figures and playsets are highly prized collectibles, with some fetching thousands of dollars in the open collectibles market.

The Dreadful Dracula was introduced in 1974, part of the Mad Monster Series. It was the only character in the mad monsters line who is supposed to resemble a human, but turned out to be more of a cartoon character like that of Scooby Doo or The Groovy Goolies, with its short black cape, bulging glow in the dark eyes, and its stretchy painted on suit.

The packaging came in several varieties as well. There were beautiful solid box versions, box with clear viewing window, and on card back.

Of the Mad Monster Series. Dracula is the hardest to come buy these days, as monster toy collectors, have sought them out for their private collections.